We are a locally owned cannabis dispensary serving Huntington Beach, California since 2017. Free delivery on orders over $50. All Bud Man Orange County marijuana products are third-party lab tested, organic, and pesticide free. We deliver premium marijuana weed flower, edibles, and vape products to your hotel, home, or office: the weed you need and the finest 420 delivery team in Orange County.

We deliver marijuana throughout Huntington Beach, California 10am to 10pm every day of the year.

Order cannabis products from our online menu, and your weed delivery will soon be on the way to your Huntington Beach home, hotel, or workplace address. 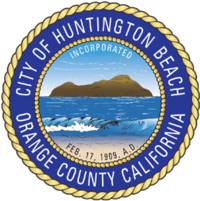 Bud Man OC offers the largest assortment of high-quality marijuana products in Orange County. We deliver your favorite ganja brands including Cannabis Cup award winners and other top-shelf brands – not to mention the finest selection of marijuana flower in Huntington Beach and all of Orange County.

We deliver weed 7 days a week (including all holidays) from 10am to 10pm. We ensure all marijuana deliveries are professional and discreet. Please have exact change ready to complete your cannabis purchase. Our 420 drivers do not carry cash. We can meet you at any Huntington Beach location, including private homes, hotels, and workplaces.

They say that oil and water don’t mix, but Huntington Beach, California may be the exception to that rule. Soon after the town was settled in the early 20th century, oil was discovered underground, and petroleum soon became powerful economic force in the city and region. Standard Oil of California, later known as Chevron, acquired mineral rights in the town, and the company still owns significant tracts of land in the weed-loving city of Huntington Beach. Enter the beach lifestyle and marijuana culture.

During the post-war period, surfing began to grow in popularity – as did smoking weed – and Huntington Beach’s nearly 10-mile stretch of sandy beach was perfectly served by swells of waves created by the presence of Catalina Island. Huntington Beach still enjoys some of the best surfing conditions in the world with consistent waves and balmy temperatures year-round. Huntington Beach residents also enjoy the finest weed flower in the state of California, delivered right their front door.

Now in the 21st century, Huntington Beach is famous for its beach lifestyle and embrace of cannabis culture. HB residents love a tubular wave as much as a delicious bowl of sticky buds. Give Bud Man Orange County a call. We’re here to make you Huntington Beach moment even better. Order now and your weed will soon be on the way to your Huntington Beach location.