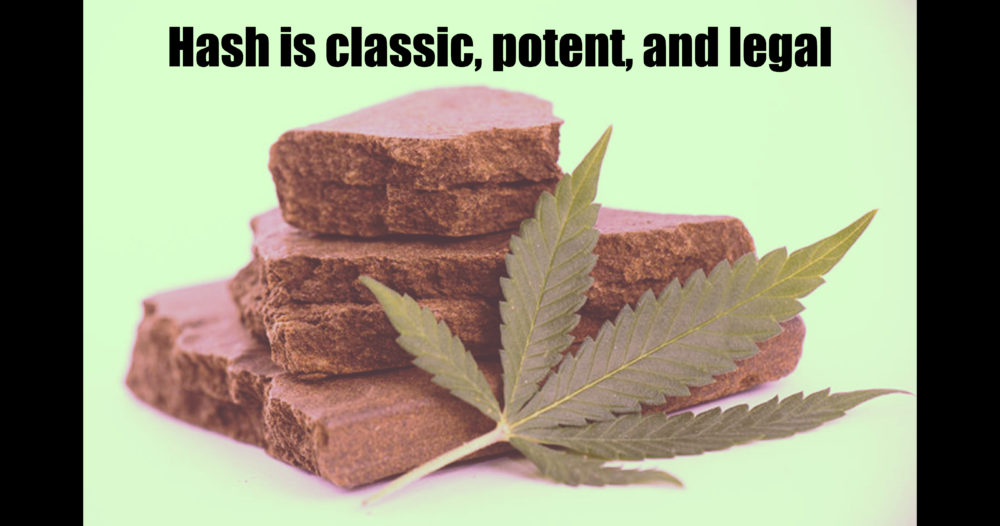 In our last blog article, we provided a brief explanation and history of hashish, a form of cannabis derived from the ripe, resinous glands known as trichomes that cover the surface of the cannabis plant. Let's take a deeper dive into the history and production of hashish to understand how lucky we are to have legal hash in Orange County, California!

The process of separating resin from the cannabis plant for human consumption has been practiced for centuries. However, the legalization of cannabis in the United States and other countries has ushered in new methods of hash preparation.

The History of Hashish in Europe

Hash made its way to Europe from Asia in the 18th century. There is evidence that cannabis was first mentioned scientifically in 1777 by Johann Friedrich Gmelin, a German professor of chemistry, medicine, and botanicals. Gmelin also wrote about bhang, which is an edible cannabis mixture. Gmelin describes the effects of bhang (aka bangue) as stupefying, mind-clouding, and intoxicating. Like hash, bhang has its origins on the Indian subcontinent. The difference between hash and bhang is that bhang is made from the cannabis plant's leaves. (The leaves can be mixed with milk, sugar, fruit, and spices for a delicious stoney cocktail.) Whereas hash is made from the resin glands of the cannabis plant, also called trichomes.

French soldiers were introduced to hashish in Egypt while serving in Napoleon’s Grande Armée circa 1798. After the invasion, French soldiers brought cannabis back to Europe. In 1811, the founder of homeopathy, Samuel Hahnemann, published information about the effects of cannabis sativa in his work Reine Arzneimittellehre. In 1830, a description of marijuana’s effects was published by German pharmacologist and botanist Theodor Friedrich Ludwig Nees von Esenbeck. Hashish became widespread in 19th century Europe and was available for purchase at most pharmacies.

The Difference between Hashish and Charas

Both hashish and charas are similar products derived from the cannabis plant, but production methods are different. Hash is made from dried cannabis plant, while charas is made from a live plant. The variety of charas produced in Himachal Pradesh, a Himalayan state in India, is considered to be the highest quality.

Charas is harvested by hand from live cannabis plants. Removing the plant from the soil is not part of the charas production process. Harvesters go into cannabis fields and rub flowering buds between their palms. When the hands are coated with a dark brown resin, the substance is scraped off and stored. This is charas.

By the end of the workday, one person can produce between 8 and 9 grams of charas. It is a slow and manual process that cannot be rushed.

The dry sift method is the traditional method for making hash. A manual separation process uses friction to remove trichomes from dried plant material. Marijuana buds are sifted through a filtration screen by hand or with machines. Some manufacturers prefer frozen plant material because the trichomes separate more easily from the plant. A container is positioned under the filtration screen to catch the shake (kief) as it falls through the screen. Kief is then collected and compressed into a solid mass that is similar to chocolate in consistency. When pure, hash is soft and pliable. When a high level of THC is present, the end product will be lighter in color and will soften in the warmth of a hand.

The dry ice method (which produces bubble hash) is similar to the dry sift method except, you guessed it, it’s done with dry ice. Dry ice is used because it is colder than regular ice and doesn’t melt into liquid. Cold temperature makes the trichomes easier to break off and separate from the plant material.

In addition to these two methods, there’s also a chemical process that results in oil instead of solid bricks. Instead of using friction to separate trichomes, solvents such as ethanol, butane, or hexane can be used to dissolve resin. The remaining plant material is filtered out of the solution and discarded. The solvent is then evaporated or boiled off, leaving behind the trichome resins. The final product is known as honey oil or hash oil.

Hash oil varies in consistency and hue based on the temperature and method used. Colors range from honey gold to dark black. The product is an oleoresin, which is a semi-solid extract. The extract contains resins, waxes, fats, and essential oils. It can be further purified using vacuum distillation to yield red oil. You can smoke, vape, dab, or eat honey oil.

What Else You Need to Know about Hash

Depending on the production method, hash may contain traces of soil and plant material – which can affect the appearance, texture, odor, and potency of the hash. Foreign substances present during the production process will reduce purity and can lend a green hue to hash.

The THC content of hashish ranges from trace amounts up to 65%. Hash oil THC levels generally range between 30% and 90%. Hashish can also contain measurable amounts of CBD, CBN, and trace amounts of other cannabinoids. New hybrid strains and improved production methods have resulted in increased potency of hashish available in California and other legal marijuana states.

Traditionally, the largest producers of hash have been Afghanistan and Morocco. Lucky for you, an international trip is no longer necessary to score top-shelf hashish in Orange County. Bud Man has a wide selection of hash products ready for delivery to your home, workplace, or hotel.