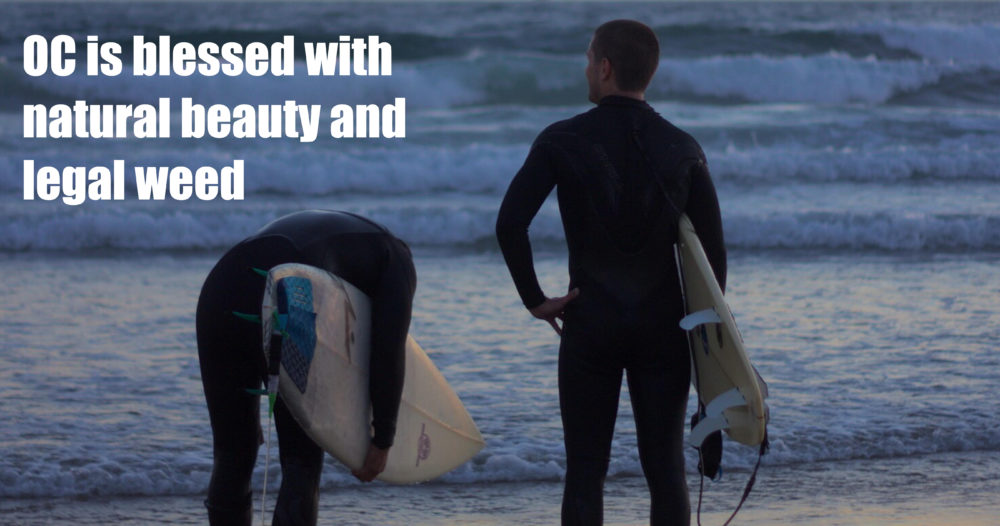 How many times have you fired up a phatty and plugged into a home streaming marathon? Probably more times than you can count because weed and movies go together like peas and carrots. But you don’t always have to settle into the couchlock and be just an observer. Orange County has plenty of scenic movie locations that you can visit to get into the right 420 headspace.

There’s nothing like being high on top-shelf marijuana flower and feeling your toes in the sand as the ocean waves roll up onto the shore. But when you visit Laguna Beach, you can enjoy more than just the Pacific’s natural splendors. Oliver Stone’s hyperkinetic Savages was partially set in Laguna Beach, and many scenes were filmed in the area. The Bette Midler cryfest Beaches also had scenes in Laguna Beach as well as Crystal Cove.

Let’s Take a Trip in the OC

Characters in films, even when they’re fictional, need to take real means of transportation to continue their physical and metaphorical journeys. Two modern classics made use of a couple of Orange County traveler hot spots. The feel-good movie Rain Man with Dustin Hoffman and Tom Cruise shot its final scenes at the Santa Ana Train Station. Another Tom Cruise vehicle, Jerry Maguire, made use of the baggage area at John Wayne Airport to shoot some scenes with their own emotional baggage.

A Piece of Orange County History

A couple of older and more distinguished Orange County locations have given a few period films some much needed historical accuracy. Tom Hanks’ That Thing You Do transformed our classic Old Town Orange into Erie, Pennsylvania in the 1960s – the birthplace of the film’s band the Wonders. Michael Bay’s bombastic Pearl Harbor featured Tustin Hangar as part of a flight drill with Alec Baldwin, Ben Affleck, and B-25 bombers.

The Truth Will Get You High

Some of Orange County’s places of higher enlightenment have acted as backdrops for a few faster paced films. The Tom Hanks and Leonardo DiCaprio thriller comedy Catch Me If You Can shot some important scenes at the Old County Courthouse in Santa Ana. And the University of California at Irvine helped add some brainy content to the George Clooney and Brad Pitt heist film Ocean’s Eleven.

Southern California is blessed with natural beauty and a sunny climate – along with a thriving marijuana and surfing culture. We’re lucky to be OC residents with legal weed delivery to any location in Orange County. Put that in your pipe and smoke it.