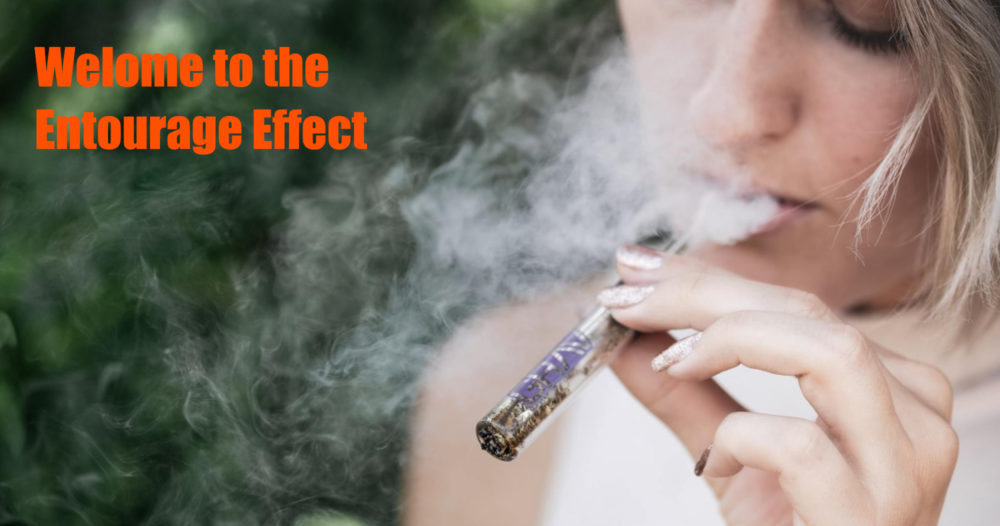 When we get lit, we may not always think about how the process actually happens on a micro level. Or we might, actually, if we’ve smoked enough. Hate to break it to you, but it does not involve tiny microscopic green trolls messing with your neurotransmitters like you might’ve hypothesized one night over a particularly psychoactive bowl.

To be a true ganja geek, you need some in-depth knowledge of the plant’s chemical composition. Soak up the in-depth molecular marijuana info in this blog post, and you’ll be the neighborhood’s dankest expert on Mary Jane chemistry.

To really “get” the chemical makeup of marijuana and how it works, it’s important to have an understanding of The Entourage Effect. The Entourage Effect is the term used to describe the interplay between the compounds found in weed when you get high. It isn’t just the chemical component THC creating the psychoactive effect – the high happens when all of the compounds synergistically interact with each other. The interacting compounds include terpenes, flavonoids, and cannabinoids.

Have you ever wondered what gives pot its unique flavor and smell? It comes from terpene compounds, one of the three main components that comprise The Entourage Effect. There are a number of different terpenes that exist, including but not limited to myrcene (herbal), pinene (pine), limonene (citrus), and terpinolene (fruity). The combination of terpenes can change from plant to plant, and when they interact with THC, the experience and potential benefits you gain (health or otherwise) when smoking a particular strain is directly influenced by the specific terpenes in that strain. So next time you get a whiff of a dank doobie, remember that the smell will actually play a role in your high. Trippy.

While terpenes influence the scent and flavor of bud, the presence of flavonoids – compounds that are also found in fruits and vegetables – add to the sensory experience by influencing flavor and color. They also provide a range of potential positive health benefits that scientists are still unlocking, including anti-inflammatory, antioxidant, and anti-cancer effects. It’s known that flavonoids play a role in The Entourage Effect, but how exactly is still in large part a mystery.

Cannabinoids contain the compounds that most of us think of when we think about getting high: THC and CBD. Cannabis can contain many other cannabinoids, but these two divas are considered the stars of the show. Their interaction with terpenes and flavonoids produces The Entourage Effect, and cannabinoids act as the carriers of the psychoactive effect by latching on to neurotransmitters in our bodies.

Under the umbrella of cannabinoids are isomers. You’re familiar by now with the chemical component THC found in marijuana, but what you may not know is that there are two different compounds of THC: delta-8-THC and delta-9-THC. Both are considered psychoactive, but delta-8 is gaining popularity as a milder, more relaxing experience than the high-as-a-kite feeling you get with delta-9 – yet it doesn’t have a sedative effect like you might expect with an indica strain. Delta-8 occurs naturally in cannabis, but it can also be derived from CBD in a laboratory.

Delivering Weed to both Doobie Newbies and Weedsperts in Orange County

Congrats, you just graduated from Bud Man’s Ganja Geeks 101! As if Mary Jane could be any cooler, learning how she works on a molecular level might make your next high even trippier.

If you’re looking for marijuana delivery in Orange County, look no further than Bud Man OC. We deliver 365 days a year from 10am-10pm. Give us a call or order online.