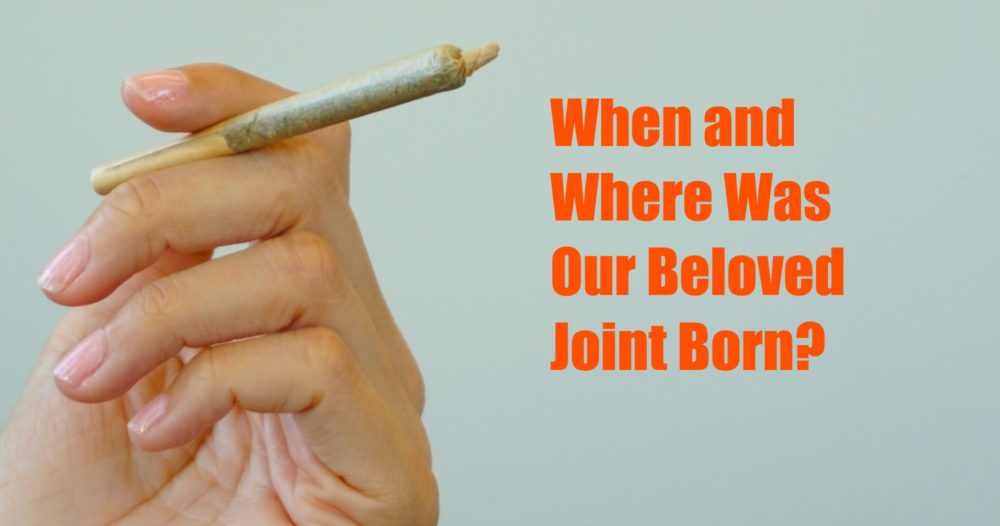 It’s pretty trippy to think about all the different ingestion methods in modern day marijuana use – we have oils, cartridges, edibles, pre-rolled joints, and bongs of all shapes, sizes, flavors, and styles. The humble joint has its own origin as an invention however. Hundreds of years ago, there was a moment of creative genius (“I can roll this and smoke it!”), and that genius is still being used to this day.

So how did rolling papers get started? Where did the joint come from, and what has given it such lasting power? Gather round, ganja geeks… it’s “high-story” time. Pull up a chair, roll a doobie, and get your learn on.

The Origin of Rolling Papers

There’s physical evidence that people have been smoking marijuana for at least 2,500 years, but the “joint” wasn’t a common ingestion method until much later.

Before the joint could be created, it had to be preceded by rolling papers. It’s hard to determine just how long rolling has been used for smoking, but it’s known that indigenous peoples prior to the 14th century were using leaves to roll and smoke their tobacco.

Pipes and cigars (tobacco wrapped in tobacco leaf) were all the rage before the 18th century arrival of manufactured rolling papers. Prior, peasants and beggars would take discarded cigar butts and roll the leftover tobacco in newspaper, which during the 17th century often contained lead, cadmium and other harmful chemicals.

French and Spanish entrepreneurs saw opportunity in this desperation for a rolling medium. In 1703, Spanish opportunists launched “Pay-Pay,” the world’s first rolling paper company. Lacroix rolling papers, later renamed to “Rizla” papers, were established soon after in 1736 France, and the company was commissioned to supply rolling paper for Napoleon’s entire army.  Talk about making a deal.

After 1900, today’s popular brand leaders including Zig-Zag, Raw, and Empire emerged. These brands sprung up to meet demand during the last century’s “rise of the joint.”

Then something wonderful happened for weed. In the 1850s, it was discovered that indigneous workers in Mexico were blending tobacco and marijuana and rolling it into what we call the modern-day joint, making Mexico the birthplace of “la cucaracha”: the roach.

From there, the marijuana joint began to catch on and gain popularity. In the 1870s, a Boston publication marketed “Grimault’s Indian Cigarettes” as a treatment for respiratory problems. In the early 1900s, the Rastafarian movement promoted use of the joint. Prohibition during the 1920s and the rise of jazz music made the joint even more commonplace, and by the 1960s joints had hit the mainstream and became a staple of the decade’s “reefer madness.”

The rise of hip hop and rap in the 1980s and 90s ushered in a new “joint culture” that promoted casual recreational use, thanks to artists like Dr. Dre and Snoop Dogg. This was an important movement for the marijuana industry – rap idols portrayed the joint not just as a mind-altering experience but as an actual lifestyle.

As weed has become more commonplace, it’s naturally led to the legalization movement we’ve seen in the 21st century. Marijuana consumption has more than doubled since 2001, according to Live Science. Bud is a big deal, and the joint helped make it a big deal. And it all began with the ingenuity of a few workers in the fields of Mexico. Have they been canonized as saints yet?

While there are over 10 different ways to roll a spliff, the two most common are cones and straights.

The “straight” joint is styled like a cigarette, while the cone is fatter at the end.

Straight cigarettes emerged as “cigarillos” in 17th-century Spain, and the straight style carried over to marijuana use in the later 1800s.

It’s unknown when exactly the cone joint was created, but the rolling style itself started with tobacco. Indigenous people had been rolling for centuries, however, and they may have used a cone shape that didn’t catch on in the “westernized world” for marijuana consumption until the 20th century.

Think of a waffle-style ice cream cone. A straight cone wouldn’t allow enough room for multiple heaping scoops of ice cream at the top. The conical joint works the same way – its cone shape allows extra room for more weed or tobacco. A definite plus, and people have likely known for many centuries that this style of rolling can hold more of whatever it contains.

Many smokers also believe the cone joint burns more gently and evenly than a straight joint, and the look of the cone has become iconically recognizable.

There’s no doubt a satisfaction that comes from successfully hand rolling the perfect joint, but it takes practice to become a pro roller. Luckily, in the 1880s, the rolling machine was invented. Originally used for tobacco, the “Bonsack machine” paved the way for modern rolling machines that can bust out the perfect cone or cig joint.

If you’re interested in hand rolling, we recommend getting started with some quality rolling papers like Raw, Elements or Zig-Zag.

Pre-rolls have the cool look of the cone with no rolling skills necessary. We offer a wide brand variety that include award-winning blunts as well as organic and CBD options.

Papers and Pre-Rolls in Orange County

If you’re not looking to be a rolling master, check out our wide selection of top-shelf pre-rolls. Bud Man OC delivers to your door 365 days a year. Give us a call or order online.