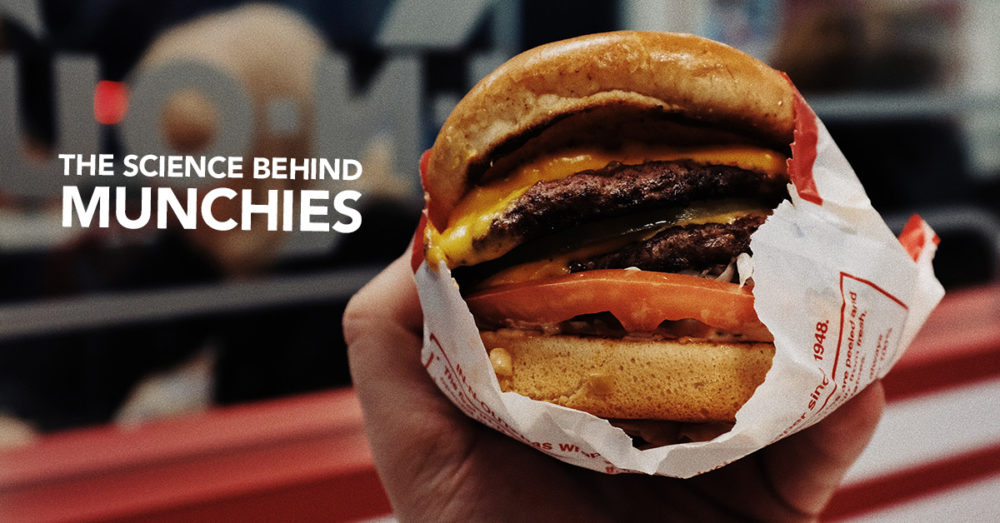 Mac n’ cheese, Ben & Jerry’s, pizza, and more… no food group is safe when the munchies take control. You probably already know how to cure your particular brand of munchies, but do you know why you even get them in the first place?

Learn more below as to how our minds, bodies, and senses are affected by weed and how it causes a sense of insatiable hunger.

Here’s how it works. The THC in marijuana stimulates endocannabinoids, which triggers your hormones, which then activate feelings of hunger. This hungry “feeling”, while strong, may not necessarily deem a real physical need, but rather a falsely stimulated appetite.

When a case of the munchies hit, why do we never seem to crave healthy foods like salad? For the same reason you yearn for fatty foods when physically hungry, the same applies even when it comes to simulated feelings of hunger.

Blame evolution. Human bodies crave fatty foods because when hungry, our bodies go into starvation mode. It wants high-fat and high-calorie foods right away for an immediate boost of energy. Our caveman ancestors depended on this calorie boost in order to survive, where sprinting away from danger was a real life-or-death situation.

Another reason smoking makes you hungry is because your sense of smell is heightened. Marijuana enhances our senses, one of which is our sense of smell. And when you smell more, you taste more. Scents are also strongly tied to memory so if you’re smelling and reminiscing about pizza, it’s bound to bring on a strong sense of euphoria once you actually eat it.

When our bodies feel physical sensations of hunger, we eat. And when we eat enough, our bodies will then send a signal to our brains that we are full. But when throwing cannabis into the mix, our brains and bodies miscommunicate.

Science isn’t sure as to why this happens, but here’s what they know as to how: the part of the brain responsible for sensations of fullness suddenly start signaling feelings of hunger. This happens because the cannabinoids alter your brain circuits from releasing an appetite-suppressing compound, to one that increases appetite, instead.

It’s All in Your Head

Your mind, body, and spirit too. Marijuana is a drug and as such, it affects our chemical makeup. By altering our hormones, physical senses, brain-to-body communication, and more, it’s plain to see how cannabis increases our appetites and has famously been come to known as “the munchies”.

Now that you know why it happens and why you crave specific foods, be mindful of your marijuana and food intake to ensure your health.