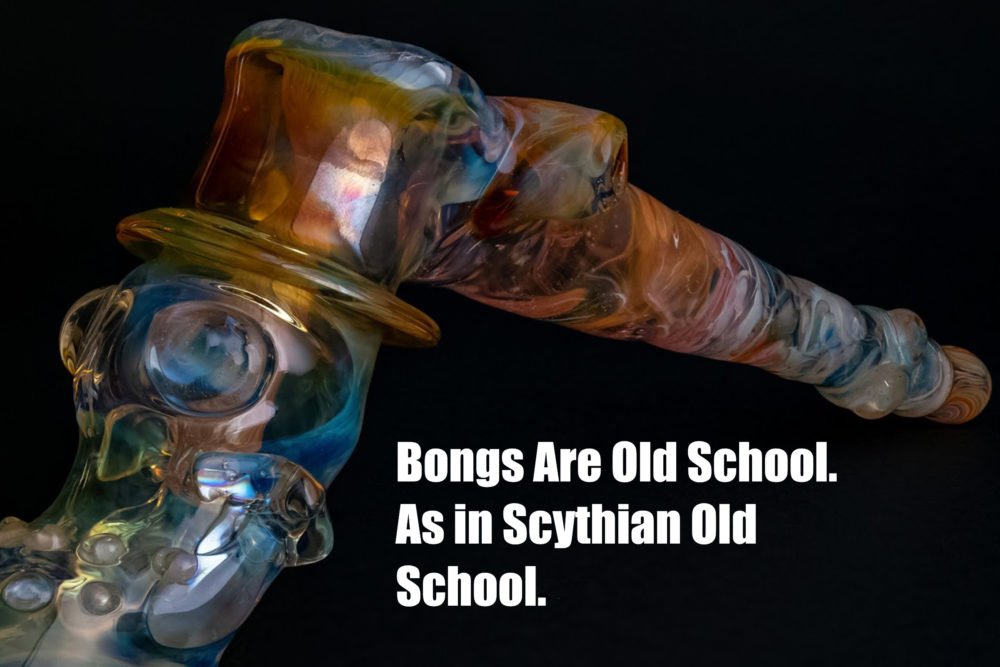 The posts in this series explore the history, legends, and lore of interesting events, devices, people, and stories in cannabis culture.

Everyone has their preferred method for ingesting their favorite form of cannabis, but the bong has held a special place in the human psyche for generations. Most recently made popular during the cultural revolution of the 1960s in the United States, the bong actually has a much longer history that stretches across continents, people, groups, and substa

nces. Here’s everything you never knew you needed to know about these dope contraptions.

Bong derives from the Thai word buang, which refers to a cylindrical wooden tube or container cut from bamboo. Today, when we say the word bong, we mean a pipe that uses water to filter smoke before it reaches the user’s mouth. It is air- and water-tight, and uses a carburetor to intake fresh air into the bong. But the history of the bong goes back a lot farther than the psychedelic revolution of the 1960s – even farther back than the name itself.

The Bong in Antiquity

The oldest bong ever discovered was found in Russia by a team of archeologists and dates to approximately 2,400 years ago. Made of solid gold, this ornately decorated bong was used by Scythian tribal chieftains and was used to smoke cannabis and opium. The Scythians were known in ancient times as ruthless, warlike people, who ruled vast areas of Eurasia for more than a thousand years. And some historians have suggested that they smoked this opium-cannabis combination to alter their state of mind either before or after battle. The Greek historian Herodotus once wrote, “Scythian used a plant to produce smoke that no Grecian vapour-bath can surpass which made them shout aloud.” 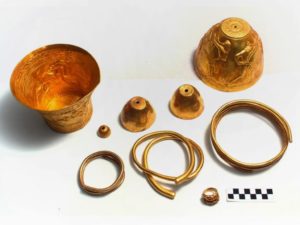 Before the Scythian bongs were discovered, the earliest examples found by archeologists were in Ethiopia and dated to between 1100 and 1400 BCE. These 11 bongs were found in a cave and used ducts and bottles made of animal horns or pottery. Many of them extended underground to serve as a primitive cooling system.

The earliest written record of a bong comes from 16th Century Central Asia, during the Ming Dynasty and was primarily used for smoking tobacco, as cannabis was not widely known or available. By the Qing Dynasty, the water pipe had traveled through Persia via the Silk Road. Commoners generally used homemade pipes made from bamboo, while wealthier smokers like merchants or nobles used metal pipes fabricated from bronze or brass and ornately decorated. Over the next few centuries, tobacco’s popularity as a cash crop grew, and Europeans simultaneously developed a taste for glassware. I’m sure you can see where this is going.

The Glass Bong in American Culture

The bong as we know it today was most famously pioneered by Bob Snodgrass, a glassworker who developed his unique craft in the 1970s and 80s while touring with the Grateful Dead (because of course!). Known as the Godfather of Glass, Snodgrass says that while he didn’t invent the glass pipe, he did accidentally invent a process called “fuming,” which consists of using flecks of gold and silver in the glassmaking to make the pipe change colors as smoke and resin accumulate inside. He also invented the side carburetor and bubbler – features that many smokers today consider essential.

Since the 1970s, Snodgrass-style glass work has been a central theme of cannabis culture in the United States. Virtually every smoke shop in every American town features blown glass pipes that change color, and the glass bong has been a smoking fixture in the decades ever since.

Research has shown that water-based pipes and bongs filter tiny particles from the smoke, reducing the amount of toxic substances that pass into the lungs by as much as 50 percent. Further studies show that reducing these particles actually leads to healthier lung tissue, making it easier to fight off infection. And the best part is, all of this is accomplished with very little reduction in THC consumption!

Looking at the history, it’s clear that humans have been using bongs for cleaner hits for centuries – even millenia. We don’t have to travel back in time to visit ancient warchiefs in Iran or Russia to find prime examples. The history can be traced across Eurasia, along the Silk Road, into the homes of middle class Europeans, all the way through Grateful Dead tours and into the homes of Gen X and Millennial smokers in America. With such a rich history and benefits of filtration, the bong is without doubt a mainstay of 420 culture.