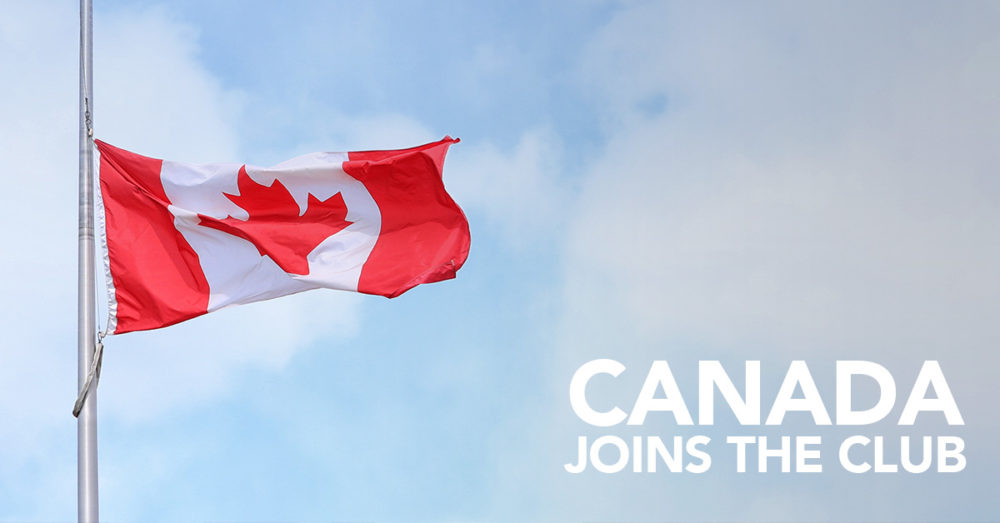 Following in Uruguay’s footsteps, Canada becomes the second nation in the world to legalize recreational marijuana use on a national level. Trudeau made a campaign promise in 2015 to decriminalize adult marijuana use and with a historic bill passed by the Senate, Canada will soon be the second country in the world to legalize recreational marijuana — also being the first G7 nation to do so.

Known as Bill C-45, aka the Cannabis Act, this bill was brought by Canadian Prime Minister, Justin Trudeau as a means to keep the drug out of teenager’s hands and to stop distribution on the black market. Introduced on April 13, 2017, passed at the House of Commons in late November, amended by the Senate on June 7, 2018, and then finally passed by the House of Commons in late June — recreational use of cannabis will no longer be against the Canadian Criminal Code as of October 17, 2018.

While legalization on a national level comes with benefits such as tourism surges, increased tax revenue dollars, and decreased governmental costs associated with drug arrests, Trudeau’s motive centers around the children, as evidenced by his Twitter statement, “It’s been too easy for our kids to get marijuana – and for criminals to reap the profits. Today, we change that. Our plan to legalize & regulate marijuana just passed the Senate.”

What Canadians Can Expect

Upon formal approval of the bill, adults will legally be allowed to “carry and share up to 30 grams of legal marijuana in public.” In terms of growing, adults will also be allowed to cultivate up to four plants per household. When it comes to purchase, consumers are expected to turn to federally licensed retailers (with marijuana to be sold separately from alcohol and tobacco products).

Driving Under the Influence

In terms of upholding safe-driving practices, the Canadian government has already implemented changes to their impaired driving laws, introducing limitations and consequences for driving under the influence of cannabis.

The minimum age for consumption will be 18 years old. The production, distribution, and sale to minors will be illegal. To note, provinces can increase the minimum age at a local level.

Legalized recreational marijuana is expected to become a billion-dollar industry for Canada thanks to many of its citizens willing to pay a high premium for the drug.

Even though cannabis will no longer be illegal as of October 17, 2018, it doesn’t mean that every corner in every province will have a dispensary. Instead, availability will vary across the country as provinces decide their local rules of engagement (age requirements, where to sell, etc.)

Marijuana: as Canadian as Maple Syrup

As multiple public opinion polls and research studies show, Canadians overwhelmingly favor the decriminalization of cannabis use. A high percentage of the population already uses the drug — even though it’s currently illegal, so a bill like this was overdue. Thanks to Trudeau’s progressive values with a majority of the nation in favor, what was once a campaign promise is now a national law.