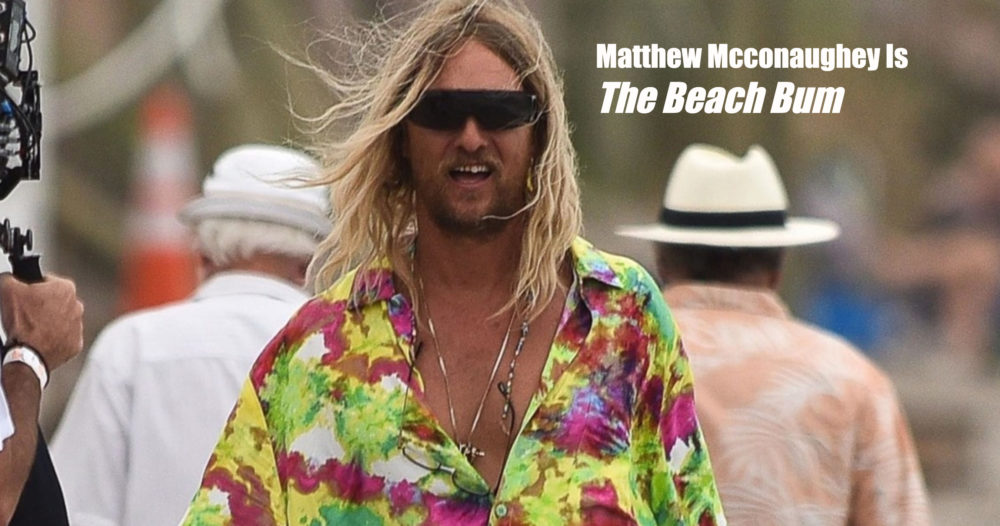 He’s the best. Best onscreen stoner, that is. His Texas accent fuels the fire that floats from the tip of his big fat blunt in every smokin’ movie he’s made. His newest, The Beach Bum, directed by the weirdest of the weird, Harmony Korine, is another chapter in the anthology of high hilarity McConaughey has brought to the big screen. He plays Moondog, a wannabe poet and lazy lunatic.

"Life is a fucking rodeo, and I’m going to suck the nectar out of it and f**k it raw until the wheels come off."

In introduction of our other favorite fired-up flicks by the beloved film star, let’s begin with his most notorious headline ever. If you weren’t around to hear about it at the time, well, here you go:

From The Smoking Gun: Matthew McConaughey was arrested by Austin, Texas police in October 1999 and charged with possession of marijuana and drug paraphernalia after a neighbor called to complain about music blaring from the actor's crib. When cops arrived, they found McConaughey dancing around in the buff and playing bongo drums.

And thus McConaughey’s pothead reputation was solidified. Against all odds, he isn’t typecast, and has gone on to win an Oscar. But for now, let’s stick with what we know.

In Dazed and Confused McConaughey plays Wooderson – the character who riffed the often-quoted, “all right, all right, all right!” – has plenty more to say in the film, and every word is a laugh-riot. Discovered by director Richard Linklater, Texan McConaughey delivers his lines with perfection, slow and syrupy like he’s been high his whole life. He serves up a performance that is so natural, the speculation that he’s a real-life pot-smoking fiend is laid to rest when his naked bong-playing arrest makes the news. Now that’s all right!

Wooderson: "Say man, you got a joint?"

Surfer, Dude Starring a stoned trifecta: McConaughey, Woody Harrelson, and the lovely Willie Nelson, Surfer, Dude follows the easy life of surfer Will Addington and chronicles the fallout that comes from ignoring the need for the mighty moolah — the dollar. With that infectious grin surrounded by that seductive tan, this man nails the perfect smoker speech pattern again and again! This is an incredibly fun ride, fortified by the real-life friendship of the aforementioned weed heads.

Customs Agent: "Is that a job, surfer?"

Harmony Korine has said since 2017 that he wants Smoke This to be screened in rooms that will pump marijuana smoke into the space, effectively hotboxing the place and its viewers, dubbing it “smell-o-vision.” We haven’t yet found a list of such screening rooms, but that shouldn’t deter anyone for giving it a go. Smells like a pretty good way to spend a Saturday night – with some gnarly smoke and good friends. All right, all right, all right!